Most of us have been there, but not many know what is really going on and how to stop it: yes, we’re talking the dog mounting. We’re re-posting this great blog entry by Dr. Sophia Yin.

Many neutered dogs perform this embarrassing social faux-“paw”, not because they’re being amorous or trying to dominate, but because they are socially inept . For instance, when I first adopted my Jack Russell Terror, Jonesy, he tried greeting my older Scottie by mounting her.

Not surprisingly, she got irritated and barked and snapped at him to go away. He would immediately back off. His immediate retreats revealed that he wasn’t trying to assert higher rank. If he were he would have responded by starting a fight. Rather he was just playing. In fact he would occasionally even perform a play-bow. He quickly learned to stop trying to mount her. 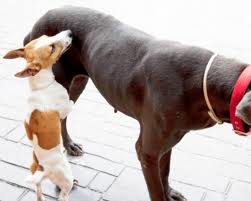 Once Jonesy firmly became a member of the family he would occasionally try to mount my old Australian Cattle-dog Zoe. Like human children where there is not necessarily an established rank, with dogs there’s often give-and-take when it comes to priority access over resources. Sometimes, one dog gets the favorite bed first or the bone, and they may just be very willing to share. In this particular household, Zoe always made it clear, she wanted priority access to her favorite things ahead of Jonesy. If she wanted a toy she’d get it first, if Jonesy was running around too fast or in a rowdy fashion near her she made it clear he should slow down and stay out of her space. Jonesy willingly deferred. So his mounting of her was not a rank challenge. Instead, he would wait for her to go outside and squat to potty and then take the opportunity to hump her. It also turns out that he tended to lay in wait and then run and hop on only when she was starting to get a vaginal infection.

Regardless of the cause of the rude behavior, the solution is simple. Just teach your pooch a really good come when called so that you can call him away before he has a chance to mount. Then once you have him with you keep him focused long enough so that he’s no longer immediately interested in going back to try again. That means you have to practice at first when he’s on a long leash and you have good treats or kibble that you removed from his regular meal. The goal is to make come when called as fun and exciting as humping dogs or chasing squirrels. This usually has to be taught in a step wise fashion, first in a low distraction environment and then with higher distractions. And, to make the recall reliable, you have to make sure you only call your dog to come when you know he will immediately run to you and receive a reward until this behavior becomes a habit. If you always call him away right before he starts to mount, keeping all of his feet on the ground will become his new greeting habit.

We value your opinion!