One can lead with finesse, not force.

Virtually everyone who started as a dog trainer over 15-20 years ago started out using traditional dog training techniques: similar to those used by Cesar Millan (The Dog Whisperer).

Traditional training techniques are based on the idea that we must become the dominant leader and rule our pets the way a wolf would rule a pack. That is, they assume most misbehavior in dogs is due to the dog trying to be dominant and then they employ techniques that they think a wolf (since dogs are seen as having a social structure similar to wolves) would perform in a wolf pack. 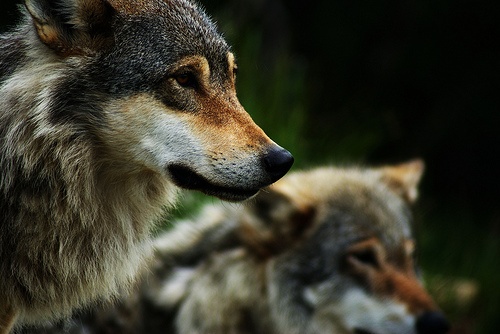 Millan’s concept of dominance is based on an old understanding of the behavior of wolves. In the 1960s, researchers observed that wolves formed large packs in which certain individuals beat out others to earn “top dog” status. These were called “alphas.” Millan contends that a dog displaying aggression is trying to establish dominance and attain alpha status, much like its ancestors. He advises humans to take on this position themselves, forcefully if necessary, to keep the dog in a submissive role.

Note that dogs evolved for the past 10-15,000 years as scavengers with a promiscuous mating system. That is, free roaming dogs mate with multiple members of the opposite sex. Virtually all males get to mate. Consequently a rigid hierarchy and high rank would not confer a huge advantage compared to, say high rank in a group of bulls or chickens.

In the wild, a high ranking animal’s alpha status may only last a short time. That is, it will last only as long as the individual can maintain it’s rank though aggressive acts. For humans attempting to use dominance theory to control their dogs, only those humans who are strong enough to attain the high rank can do so with low risk of injury. Once in this spot they must be strong enough to maintain the high status.

Wolves in the wild generally do not gain their high rank by fighting their way to the top. Instead a male and female breed and the pack is a family unit comprised of the parents and the offspring. The parents naturally become the leaders. The offspring naturally follow their lead. As a result of this discovery regarding pack structure, wolf biologists no longer even use the term alpha with wild wolf packs.

The idea that we need to dominate animals (especially dogs) is based on faulty information on what wolves do in the wild.

One can lead with finesse, not force

For instance, if an animal is fearful, it doesn’t make sense to treat it by trying to “dominate” it. That won’t bring it out of its fear state.

Compare, for instance, these two videos:

Now let’s see what Cesar Millan and other old-school trainers would do. He/they use a process called flooding (although sometimes they erroneously think they are using desensitization) where he/they expose the dog to the undesirable condition full force or enough to cause an aggressive or strong fear reaction rather than starting at a level that barely or does not elicit a response.

If the dog in this video gives up in the end, and stops lunging, do you think it would be because it feels better?

Do you think the dog will get better or worse with each visit?

Let’s look at this other video. How many people have seen a dog that doesn’t like its toenails trimmed? Instead of using force, we can pair food with the procedure so that they learn to associate the procedure with good things.

When we do this we have to combine it with desensitization. That is, we start the stimulus so low it doesn’t really elicit a response and we pair this with something the dog likes (treats, petting, etc). The goal is the dog never reacts – it is just focused on the treats.

Do you think the dog will get better or worse with each visit if we focus on changing the underlying emotional state?